From June 5th to July 5th, 2015, 13 American students of the University of Texas at San Antonio (UTSA) and their Faculty leader, Dr Joel Christensen, will participate in the 4th edition of the Summer Program "The Classical World: Anthropology, Art and Culture" organised by the Center for the Anthropology of the Ancient World in collaboration with UTSA Department of Philosophy and Classics.

“The Classical World: Anthropology, Art and Culture” offers students the unique opportunity to learn and practice an innovative interdisciplinary approach to the study of the ancient world, while working with some of the top scholars in the field of classical studies. Structured as a “workshop” in which students are actively engaged in the “hands-on” application of anthropological theories and methods to the study of the classical world, the study abroad program takes place over four weeks, and includes both a classroom- and a field-based component. The classroom-based portion of the program is organized into week-long thematic sections, in which students explore the history of anthropological studies within Classics and the major themes of the “anthropology of the ancient world”. In the field-based part of the course, students undertake their own research projects, exploring the themes above through the study of literature, art, archaeology, etc. This will entail weekly on-site visits to museums and other places of historical, archaeological, cultural importance in and around Siena: Arezzo, Pisa, Rome and Florence.

Participants in the program enroll in two courses during UTSA’s first five-week summer session (S): CLA 3123 “Cultural Issues in Classical Antiquity” and CLA 3063 “Art and Architecture in the Classical World” for a total of 6 semester credit hours. Students who prefer may register for these courses according to the following cross-listings: 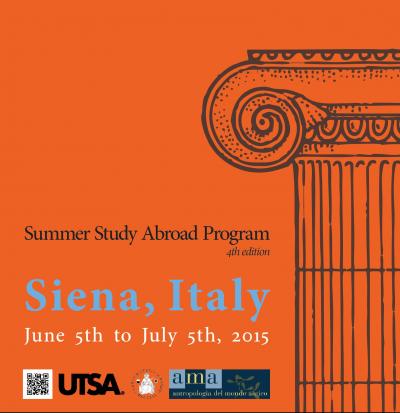 Over the course of the program, students study a series of anthropological themes, organized into distinct modules. Each module is organized as a practicum, consisting of seminars that introduce students to theoretical questions relating to the topic of the module; an on-site trip during which students collect data “in the field”; and a research workshop in which they present and discuss the theoretical, literary, iconographical information gathered during the remaining days of the module. In this portion, students will be asked to reflect upon the topic based on the different kinds of sources they have used, to consider their anthropological value, and to consider possible interpretations of the same ancient “documents” depending on different approaches.